In 1967 Dinwiddie Farms was established by James and Kennie Dinwiddie in Brazil, TN.  At that time, James operated a local community store and was a farmer on the side.  Farming, in the early years, consisted of a small number of acres along with swine and beef operations. 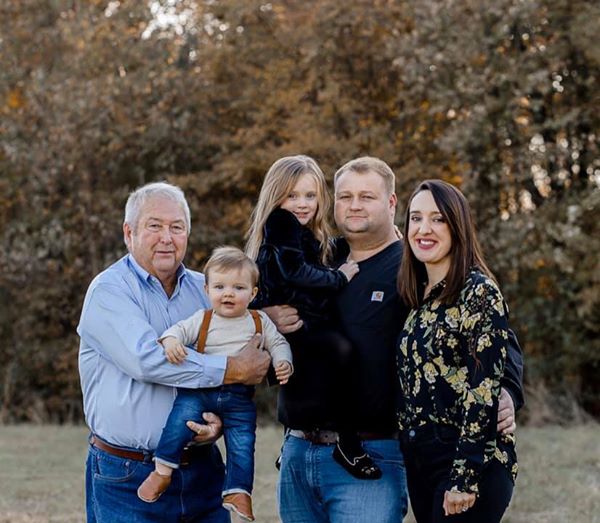 1972, Kennie began purchasing farmland. He grew row crops, which included corn, wheat, beans, and cotton and also had livestock. In 1993, Kennie discontinued the swine segment of the operation but continued to work with cattle and grow crops. The partnership between Kennie and Kaleb was formed in January 1997 after Kaleb graduated high school in the spring of 1998.  In 2011, they got out of livestock and  shifted their full focus toward row crops.  They have expanded their row crops from 800 acres to over 6,000 today.  In 2013, Kaleb and his wife, Katie, were married and purchased his parents’ portion of the operation, becoming sole proprietors of Dinwiddie Farms.

Dinwiddie Farms relocated to Alamo Highway Trenton, TN, in 2014. The move was sparked by an ice storm that occurred in March of 2014, which destroyed the farm shops located in Brazil.

The re-branding of Dinwiddie Farms to Silver Oak Farms began in 2020, and the transition was completed on June 30, 2020  As the recipient of our farm and family history, I’m proud to announce Dinwiddie Farms’ new brand Silver Oak Farms.  You might wonder why re-branding now. I received a vote of confidence from Kennie Dinwiddie, founder of Dinwiddie Farms.  This re-branding has been a long, drawn-out decision that I have been working on for more than five years.  We have considered and trashed numerous names.  They just didn’t fit our core values.  In visiting with an advisor, he throughout Silver Oak Farms.  Instantly, I felt this name fit our value chain; the oak tree represents strength, the roots represent our core business values, and silver represents the reward from our strategic planning, hard work, and countless blessings.  Don’t worry the change in name doesn’t change ownership, employees, or core values.

Silver Oak Farms has a very knowledgeable and energetic team of qualified employees.

How We Serve Our Community

Kaleb is also involved in our local community in these ways:

Silver Oak Farms is a dedicated farming operation working to sustain the next generation farming. If you are a farmer looking to retire. we can facilitate your rent negotiation as well as farm sales between both parties.  In addition, we work closely with distress farmers. Please contact us if you have any questions or read more, Management Consultation, Next Generation Farming, and Landowner Information.